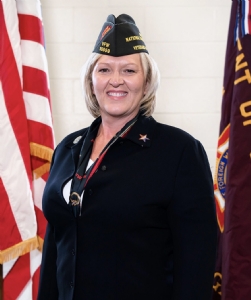 Deborah Johnson was elected as the State Surgeon of the Veterans of Foreign Wars, Department of California on June 25, 2021 in Sacramento, California.

She served in the Wisconsin Army National Guard from Feb 1985 – Nov 1994 as a Production Control Specialist with the 107thMaintenance Company, Sparta/Tomah, WI where she achieved the rank of SGT. In Aug. 1990 her unit was deployed in support of Operation Desert Shield/Desert Storm to Dhahran, Saudi Arabia where she earned her eligibility to the VFW. She received the Southwest Asia Service Medal, Liberation of Kuwait Medal and the Army Accommodation Medal.

Deb joined the VFW in 1993 at VFW Post 2112 in Sparta, Wisconsin. She is a Gold Legacy Life Member of Post 10859 in Bakersfield, California. She currently serves in elected and appointed positions at the Post, District, Department and National levels as a Co-Chair of the National Legislative Committee. She is also a Life Member of the Military Order of the Cooties, VFW Auxiliary, and VFW National Home for Children.

Currently, Deborah is the President/CEO of the California Veterans Assistance Foundation, a nonprofit organization that provides transitional and permanent housing for homeless veterans throughout Kern County, CA. She serves on the Board of Directors for several local and state nonprofit and homeless advisory organizations.

Deborah has two step daughters and one grandson. She and her husband Steve reside in Bakersfield, CA.